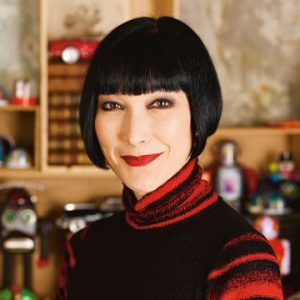 It’s probably a good thing that Claudia Chan Shaw loves hats, because she wears a lot of them. She has a stylish and artfully selected collection, ranging from 1920s cloches, to a leather trilby and a studded skull cap she picked up in New York.

With a BA in Visual Communication Design from Sydney College of the Arts, she is co-designer and director for the internationally acclaimed Australian fashion label, Vivian Chan Shaw.  The label is renowned for its exquisite handmade knitwear and jewellery. The designs are represented in the permanent collection of the Powerhouse Museum, Sydney.

Claudia has curated a number of fashion exhibitions including Vivian Chan Shaw – 40 Years, A Retrospective and Alfredo Bouret Retrospective, a tribute to the great fashion artist.

Her photography series Poster Boy was selected as part of the 2016 Head On Photo Festival and Claudia presented her solo exhibition Obscuriosity at Art Atrium gallery in 2018.

Her subsequent book Collectomania: From objects of desire to magnificent obsession, navigates the world of collectors and celebrates collections both strange and beautiful, and shares secrets about Claudia’s own love affair with everything from Humphrey Bogart to Astro Boy.

Claudia is a cultural tour leader for The Art Gallery Society NSW in association with Renaissance Tours. She leads the popular Art Deco to Art Now tour series. 2015 took her to China, followed by Miami & Cuba in 2017 and New York in 2018. Shanghai and Hong Kong, and Wellington New Zealand in  2019. Her next adventure is Art Nouveau & The Belle Epoque, a tour to Prague, Brussels and Paris in May 2020.

And she really does have a lot of hats. Her husband Stewart White is always telling her she doesn’t wear them often enough. Why? Hat hair. Enough said.

She is host and producer of Arts Friday on 89.7fm Eastside Radio and regularly appears as one of The Collectables on Weekends with Simon Marnie on ABC Radio Sydney. Deep down, she just loves a good chat and to engage with audiences.