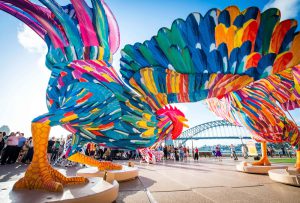 Rooster lantern for the Sydney Chinese New Year Festival by amigo and amigo. Image courtesy of City of Sydney 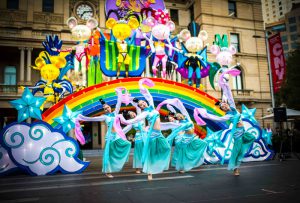 Welcome the Year of the Rooster and check out Lunar Lanterns this Chinese New Year.  Twelve giant glowing lanterns representing the animals of the Chinese zodiac are on display at Circular Quay for 17 days as part of the Sydney Chinese New Year Festival.

Finish your expedition at Dawes Point to see Claudia’s whimsical Rabbits practicing their Tai Chi, with the Harbour Bridge and Opera House as a backdrop.

And to celebrate all things Rooster, check out Tianli Zu’s Pentatonic Roosters in Chinatown. These fabulous creatures are made from Chinese musical instruments. Be sure to strike the gong which makes up one of the Rooster’s bodies. Claudia Chan Shaw had the pleasure of acting as curator for this internationally acclaimed festival for 2016 and 2017.